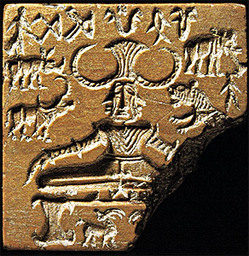 Once archeologists found inscriptions in the stones of Indus Valley, the next sign of yoga was visible in the Rig Veda. The Rig Veda is a significant ancient text dating back to 1500 and 1200 BC. Commonly known as "The Vedas," they are hymns, mantras, and rituals all put together in one book and praised as a greater being. The Vedas is the sacred scripture of Brahmanism, which is the foundation of the Hindu culture. In this text yoga is served as a term for discipline. Although it does not decipher between the practice of yoga and its techniques, it does mention the combination of discipline and breathing in regards to yoga. During this period, yoga fundamentally consisted of groups of men forming exercise practices, tapas, by gathering around a fire and making primordial sounds.

Originally created in the east, yoga was first practiced by the Hindus. Yoga is most mentioned in the main written texts of Hinduism; the Brahma Sutras, the Bhagavadgita, and the Upanishads. All three of these texts were predated before "The Vedas." The literal meaning of Brahman, from the Sanskrit is, "that without attributes."  The Sanskrit is the primary language of Hinduism. The pre-classical form of Sanskrit is known as Vedic Sanskrit. The people of this time, believed that Brahman was the ultimate transcendent reality, cosmic consciousness, world soul, the unmoved mover, or the supreme and absolute godterm or divinity of Hinduism (Israel Page 1). The reason the definition of Brahman and the text of the Brahma Sutras was so important to these folks was because it signified blissfulness. The importance of spirituality was carried through by means of these texts. Thus, symbolizing how spirituality served as the founding principle of yoga.

Throughout this era, the Vedic people relied on people known as "rishis" or dedicated Vedic Yogis, to teach them how to live in divine harmony. Also, rishis were known to be gifted with the ability to see the ultimate reality through their intensive spiritual practice. The end of the Vedic period is marked by the written text Upanishads, which concludes the traditional view of the Vedic period. The formation of the Vedic Period was mainly Around the mid-1st millennium BCE, Vedic Sanskrit began the transition from a first language to a second language of religion and learning.